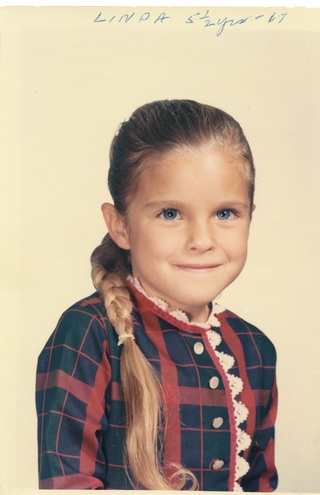 1st grader, Golfview Elementary
In the way that happens when you move back to the town you grew up in, I ended up at the elementary school where I started. It’s not an elementary school anymore, but an “alternative learning center.” I went to a meeting there with my daughter.

When I was a kid, the school parking lot overlooked the water plant. (An odd concept to me now: there was a factory where water was produced?) The most exciting news that could pass through the corridors was “Fight between Randy S. and so-and-so. Meet at the water plant after school.” And there we would watch as Randy and some other thug sparred for upwards of several seconds. In the aftermath, someone would always mention the rumor that one of the workers who built the water plant fell into the treatment pool—his body is still in the cement at the bottom.

“Why didn’t he just climb out before the cement dried?” my daughter asks as we enter the building.

We enter the doors at the far end. The gym’s to the left, and that’s where Mr. Nelson insisted I stay after school until I threw a basketball into the hoop. I was four-foot-two and totally lacking in courage, so he finally allowed a granny shot. This was also the lunch room, the place where one of my so-called friends grilled me on how I felt about all of our other so-called friends, and then reported her findings to the critical masses, or most critically, to Holly G. I was framed, but I swear I didn’t say anything the others weren’t thinking. Also, Holly was kind of a bitch, otherwise why would she have enlisted Ann to do such a thing to me, a short girl who could barely make a granny shot? Near the vat where we poured our undrinken milk, Froggy the janitor stood silently, arms crossed, leering in disgust as we privileged suburban children turned nutritious calcium into garbage. If only we had the courage to sneer back at him, he who covered our vomit with sawdust.

My daughter and I follow the sign to Room 110. It used to be the library, books lining the walls, card catalogs at the center, the whole room devoted to the Dewey Decimal System. On certain days during the summer, we were allowed to borrow books. We found our friends here. Not just Judy Blume and other authors, but kids we didn’t see except in school. Sleepover plans were hatched. The summer expanded before us; school reduced to a book we might check out if we felt like it—assuming it didn’t interfere with sleeping out in a camper in someone’s driveway.

But back to business. Grace and I are here because she’s taking a summer class online. We’re in a room of band kids, overachievers who need to squeeze in their requirements so they can stay in jazz band during the school year and still graduate a couple years hence. Everyone in the room—parents and their students—is extremely focused and driven.

Except me. I’m looking out at the playground, at the swingset especially. I remember a lot of recess time out there. I was inexplicably talented on the monkey bars. I also remember meeting my boyfriend there in high school. That was the day, spring of our senior year, when he announced he wasn’t going to graduate. He had skipped school too often, didn’t have enough credits. He either had to go to summer school or take his GED, and he said there was no way he was going to summer school. Instead, he’d get his GED and graduate before his class. Wouldn’t that show everyone? It’s hard to believe he is Grace’s biological dad.

After the meeting, I make a break to the other end of the building, to the kindergarten room. It’s locked, so I can’t see if they still have the coat room or the piano. I stand in the stairwell at the side entrance, where I remember asking my bouffant-haired kindergarten teacher if she wore a wig. Holly dared me to ask. Mrs. Sylvester nodded no. But looking back, we all know that hair was impossible.

Grace is at the other end of the hall. I call out to her. I want to tell her this funny story about Mrs. Sylvester’s big hair, but she’s pointing me back into the old library. When I catch up with her, she’s talking to the summer-school director, trying to convince him to let her enroll in a second online summer-school class.

These children we create, they are entirely separate beings.

I do enjoy reading your blog when I notice it on facebook. Best wishes.

Thank you for sharing... The school has indeed changed... I attended Kindergarten and 1st grade there. Because I was teased so, my parents say they decided to send me to the south side parochial school... I still got teased; but I never forgot some of the friends I made those two years and some of the people I met. In fact, I still kept in touch with my kindergarten and 1st grade teachers. My first grade teacher is a friend on facebook.

When I was a junior and senior in high school; There was the CETA (Comprehensive Employment Training Act) program that provided employment to kids of needed assistance. Apparently, I was able to qualify... Anywhoos, I was allowed to become a custodial aid there. I relived the memories of the school house in kindergarten playing Star Trek... cracking my chin open on the table when not listening to the teacher when she went on coffee break. Lila the MilkLady, reliving the lunchroom/gymnasium and eating balogna with ketchup and swapping goodies with friends and having my Charlie Brown lunch box... or the 1st grade teacher bringing a piglet into class and a fieldtrip to her brothers farm and learning how to make butter... There was a school program in which I was an apple and a duck wearing my yellow raincoat... the hard vinyl which allowed the rain to just slick off.

The tables and desks seemed so small... was I really that small? I just look at my nieces and nephews - I guess I musta been that small.

Thank you for sharing your stories... I too remember the open water treatment plant - never knew about the person dying in it... I remember it being open aired though and now - it is closed or else under ground. My school bus was orange and #5. There were seniors on it when I would ride into school in the morning. As a first grader I would walk. There was a creek there where Oak Terrace is now... I remember walking thru it on the way home too... cold water in the springtime.. Thank you for bringing some good memories back and the memories of classmates and fun... The days of innocence.