These boots were made for walking (funny) 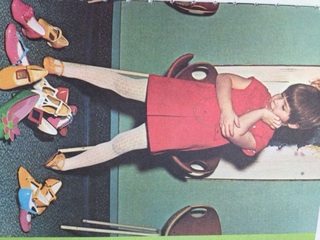 Photograph by Betty Engle LeVin, from I See a Poem, edited by Jane Ellen Dwyer, Whitman Publishing, 1968.
Nothing makes you feel like an old lady like misplacing your orthotics. To be fair, I’m not that old, and I was even younger when I was fitted with them. It’s been a few years, and this past summer I got out of the habit of wearing them every day. Orthotics don’t really fit in sandals, and even if they did, that bright-blue exposed surface is never a good look. Might as well apply red lipstick a quarter-inch above my lip line to complete the image of a woman who’s stayed too long at the party. Which was exactly the image I was trying to avoid, I realize now, reflecting on my summer as a 50-year-old. Yet I’m too young to not wear sandals.

Then a few weeks ago, when I started to wear regular shoes again, I realized my orthotics were no longer in my Mary Janes. They were not in my black Borns, or my orange Adidas. They were not in the stylish black boots I bought in New York last fall. Oh, crap. What if I left them in the brown boots I returned to the store a week or so ago? I’d ordered them online, but then a couple weeks later I saw a pair I liked better. The original pair never left the house, in case I wanted to return them, on the slim possibility that I might, might, might be able to wear the pair I liked better, with the bold, one-and-a-half-inch heel. When the second pair arrived, I couldn’t believe it. I could walk in them. The pain was not that bad, probably just a matter of breaking them in. Plus, I was now a towering five-foot-three. So I returned the first pair to the store. And then, more than a week later, realized my orthotics were missing. I bet I put them in the boots and forgot to check before I returned them.

I actually called the store, just in case the boots were still on the shelves. But they were gone. (Imagine the horror of buying boots with someone else’s stinky old orthotics in them. No, don't imagine it. Put it out of your mind. And note to self: beware the discount shoe bin.)

Now that I think about it, those orthotics might be ten years old. I got them because of pain in my ankle, which had been busted up in a car accident almost a decade earlier. The orthopedist diagnosed me as “walking funny.” He said my awkward gait was contributing to my pain. They were expensive, like $400, so I wasn't about to replace them. Besides, maybe they've done their job, trained me not to walk funny.

I always suspect my subconscious is partly at work when I lose things. Last spring the eyeglasses that I refer to as my “editing glasses” went missing. Maybe it was a sign I was devoting too much time to editing other people’s work and not enough to my own writing. But once I realized that I am both an editor and a writer, I spotted the eyeglass case on a shelf in plain sight. I swear I’d looked there a dozen times.

So when the orthotics went missing, I sort of took it as part of the whole physical-living-in-my-body effort that I’ve undertaken. For the last few weeks, I’ve been working with a physical trainer. I’m reclaiming what I used to call my Humpty Dumpty body. Maybe I don’t need the orthotics anymore.

As a kid I had to wear ugly corrective saddle shoes.Thus, it was kind of a cruel joke that after having my weak ankles “corrected” all those years ago, an injury in adulthood messed me up for cute shoes once again. It makes me think of a poem from a book my mom gave me when I was six. The poem's called “Choosing Shoes” by Ffrida Wolf:

New shoes, new shoes,
Red and pink and blue shoes.
Tell me, what would you choose,
If they’d let us buy?

Back then, “they” represented my parents, the family doctor, and old Mrs. Miller at the shoe store in North Saint Paul that sold those ugly hoofers. Now, as an adult, “they” is just me, following an orthopedist’s 10-year-old advice.

Yesterday I got a new dress, which I bought to wear with my new brown boots, the ones with the outlandishly high heels. I hadn’t worn them in a couple weeks, and as I slipped one on, my sole encountered a familiar surface. Could it be that I put the orthotics in these boots and forgot about them? (Maybe that's why it didn't hurt so much to wear them the last time?) I reached in the other boot and realized, yes, that’s exactly what I did. Welcome back to the party, Old Blues. We’re wearing our dandy dance-by-night boots. How’s my lipstick? Now don't let me walk funny.