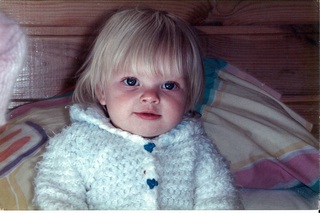 Today, my sweet baby Madeline would have been 20. Of course, she wouldn’t be a baby, although I’m assuming she’d still be sweet. But honestly, having raised two of my offspring to their teen years, genetically speaking, it’s not pure-cane sugar. There’s a certain predisposition, not necessarily bitter, but a healthy skepticism. Yes, I’d like to think we shared that.

That’s the grief of losing a child so young; the details of who she was and what she might have done are unknowable. Madeline was not quite 16 months old. I thought I knew her so well, but she acted like she knew me even better. My dad had died six weeks before she was born. By the time she was just a few months old, I saw something in her eyes, a knowing look that said she’d seen the before and had a glimpse of the past, and everything was going to be okay.

This morning, when I realized it was her twentieth birthday, I tried to focus on the joy. My water broke late at night. We went to the hospital and I was in labor for almost 24 hours, to no avail. Then, when the doctor said I’d have to have a C-section if this baby wasn’t born in the next five minutes, I pushed and swore and Madeline availed herself. She was love, acceptance, and wisdom descending on my confused and slightly dysfunctional world. My husband at the time, Madeline’s father, had what I might have characterized at as a bit of a drinking problem. I was grief-stricken over the loss of my dad, cobbling together a career, and wondering how I ended up in a little troll house in the middle of a field somewhere in north-central Minnesota. And then there was Madeline, who seemed to channel my father’s laughing eyes and understand, in a way that I did not, that life is one joy after another.

I’ve carried that joy with me ever since. It exists alongside a sadness that I wouldn’t wish on anyone. I’ve grown comfortable here, in this space that might seem a little macabre to outsiders or even to the people who love me. I like to joke that Madeline forgot to send me a Mother’s Day card again this year. And I make up stories about who she is now, as an older sister, as my eldest daughter, occupying Wall Street or attending college on full scholarship, even whether she turned out to be a blonde or a brunette. Though these things are unknowable, guessing gives me a handle on my loss, even if it’s a slippery one.

Tempting as it is to create this existence that will never be, my advice to grieving parents is to remember the beautiful person who passed through your life, whoever he or she was and for however little time you had together. There’s a moment when Madeline was about six months old, when she looked up at me with her big blue eyes and laughed like we’ve known each other forever. Now that I think about it, maybe we have.

Thanks, Linda. Sending you love.