Watching the night come in 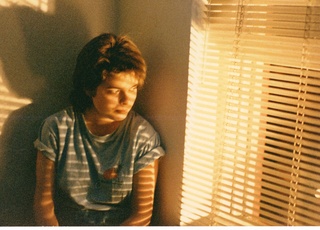 Watching the world go by on East 9th Street, summer 1984
I like to watch the night settle in, wherever I am. It started when I moved to New York City in my twenties. I lived in a sublet apartment with two friends who immediately left to work on a movie set in Vermont, leaving me to adjust to life in the big city. I got a job at a bookstore in the Village. John DeLorean was a customer, as was the guy who was the voice of Winnie the Pooh. Or was it the actor with the similarly high-pitched voice who was one of Bob Newhart’s group-therapy patients? I’m thinking the latter. Anyway, it was a lot to take in.

When I first moved to New York, I was pretty much unable to speak for the first several days. Anyone who knows me will understand how remarkable this was. I wasn’t especially scared, just in complete awe at what was going on around me—on the subway, on the streets, everywhere. My friends left for the movie set about a month after we sublet the apartment. On my way home from the bookstore each afternoon, I’d stop by the deli and buy an Augestinerbräu beer and maybe a little can of something from Chef Boyardee. I didn’t have a TV. My biggest technological advancement was an answering machine my friend Jeff had brought into the household, which led me to write a short story based on the humorous exploits that might ensue from said technology. (Sorry, can’t remember what was so potentially hilarious.) Biding my time before fall semester at Hunter College, I spent my evenings in front of the window, captivated by the movements of the drug dealers and people braver than I out on the streets.

Fifteen years later, divorced from the other roommate and living in the middle of the woods in the middle of nowhere (his idea), I would sit out on the deck of my earth home after the babies were asleep. In those days, I smoked one, maybe two cigarettes a night, and drank one, maybe two glasses of wine as I watched the stars boogie-woogie across the sky. I’d pick out one star that represented my first-born, Madeline, and wish her a good night, as if putting all three of my babies to bed.

One evening as I sat out there, I heard the horrible sound of cows mooing as if they were being tortured. I imagined the herd being loaded into trucks for slaughter, looking for any means of escape. They sounded so close, like they might burst through the trees and into our front field, on a furious rampage. But the noise had to be coming from miles away. The sound of distressed cows scared me much more than the drug dealers or prostitutes of the Lower East Side, much more than living in the middle of nowhere with two very young children.

When I look back at myself as a young woman alone in the city and a young single mother in the country, I wonder why I wasn’t more scared in either situation. Maybe it’s because some of my fears had already come true. At some point in life, you just have to sit out on the stoop or the front porch and say, “Bring it.”

Life’s much easier now. I still like to sit out on the deck in the evening and watch the night come in. On my backyard glider, I watch my neighbors tending their vegetable gardens, talking on their cell phones, maybe grilling some cow. Earlier this summer, a family of exotic-looking bitterns inexplicably took up residence in our yard, perhaps flooded out of their marsh nest. That was exciting. I take account of my empire of dirt: Churchy the turtle waiting for the tomatoes to fall from the vine; the progress of the Mexican sunflowers I planted in what was once the children’s sandbox; the canning jars in the shed waiting to be filled, this year or next. I usually go back inside before the stars come out, no longer needing to pick out the one that might pinpoint the hereafter, the love that might have been. It’s here, within. Bring it.