It was a different time. 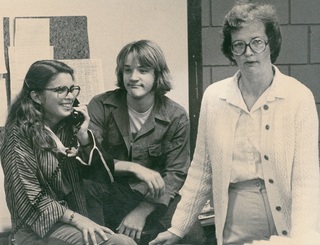 My high school doesn’t exist anymore, at least not in name. The building still exists, which is a good thing, since my eldest is graduating from there in June. But the place where I earned my high school diploma is gone.

Maybe it’s just as well. It’s the people that matter, not the place. Thanks to the fact that I moved back here to raise my kids—and the magic of Facebook—I am in touch with an astonishing number of old classmates. A boy named Tony who sat with me in my kindergarten circle has brought my kids from white belts to black belts in tae kwon do. I run into fellow cast members at the grocery store or the hair stylist all the time. Just last month I had dinner with at least one of my oldest girlfriends. A lot of people want to run as far as they can from high school. I think it’s different for us because we come from a place that doesn’t exist anymore, from an era that was defined by what came before and what came after. We’re like an extended family of middle children.

Mariner High School opened in 1973 and closed ten years later. It was a social experiment, a school without walls. The idea was to provide an open atmosphere for a liberal-arts education. But almost immediately, teachers and students discovered the value of walls. Walls act as sound buffers and help to distinguish one classroom from another. Who knew? Every school year, more walls were added. By the time I arrived in the late 70s, the open floor plan was closing in.

But a sense of independence and freethinking prevailed. Mariner students created their own schedules. Thus we learned to organize our days so that huge blocks of time were available for skipping to McDonald’s or smoking in the parking lot. The more industrious students took part-time jobs during the day. I graduated in 1980. By the time my younger brother graduated five years later, they no longer called it Mariner. It became South Campus, for 11th and 12th graders, while 9th and 10th graders attended North. As a parent of teens in the district, I have to admit it works well to have high schoolers split between campuses. My kids are getting a good education, better than I did probably (although they do need to learn that failure is indeed an option). I think it’s best not to allow teenagers to create their own schedules or curriculum, but I also think my generation was not half as ambitious or attentive to adult decrees. We were more open to adventure (and failure). My kids wouldn’t dream of skipping school like I did. Sam explained to me it’s against the rules for students under 18 to leave school.

My 17-year-old self said “So?” But I didn’t say that out loud. I tell my kids it was a different time, and it was. They think I was a hippy. But as a 1980 graduate, I was too young to be a hippy and too old to claim Gen X status. My friends and I went to the movie Hair dressed up as hippies, sort of an extension of the Rocky Horror Picture Show experience. We acted like hippies, but pretty much without the social-justice component.

Some of the older kids from Mariner got together on Facebook and started planning a Mariner reunion. It grew and now will include all nine graduating classes.* This morning they posted a request for names of classmates who have passed away so they can create a memorial for the reunion. I didn’t want to look, but I really wanted to look. And there it was: names I didn’t remember, childhood friends I didn’t know had died, people I knew were gone, and astonishingly, people I knew to be alive. (Revenge for a prom-date disaster, or just a middle-aged brain fart? You be the judge.)

I added the name of my best friend from 11th grade, who died a year and a half ago. As I sent her name off, I felt kind of bad, something like survivor’s guilt. Then I heard Kris whispering in my ear: “It’s ok, Hen. You knew eventually it had to be one of us doing it for the other.” I can almost see her, wearing a long skirt and a gauzy blouse. We’re still pretending to be hippies, like the big kids. I kiss her on the forehead, and head off to work.

The person you know to be alive is no longer a comment on Facebook...so, I will say it here - he did drive a hearse to school, correct? Maybe that was the brain fart...!

I don't remember that. If we're talking about the same person, I'll have to ask him. But how do I say, "Hey, did you drive a hearse in high school? Because the other day someone on FB was saying you died, and it got us to thinking." Awkward.

Well written article - thanks for sharing!