Born free. Live within the confines of the garden, please. 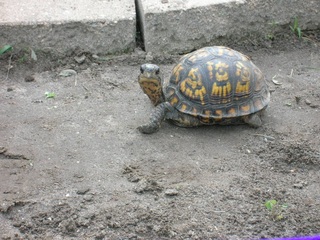 Churchy the three-legged turtle was waiting for this moment. The wind was just right to blow open the garden gate. It's a new gate, much more aesthetically pleasing than the old one, and we hadn't quite figured out how to keep it closed.

Meanwhile, we, his human family, went about our day, blue skies and upper 70s when Sven had predicted storms. After dinner, I went to say hi to Churchy. I saw the gate was open, but I wasn't terribly worried. Why would Churchy ever want to leave this garden paradise? First, I checked the tomato plants. This weekend I noticed a couple green sun-gold minis popped up, and I'm sure Churchy's keeping an eye on them too. Nope. I looked under the grapevine. I searched under the rhubarb. I scoured the lilies of the valley that line the house. Nope. Nope. Nope.

Could he really get over the log that Keith put at the base of the gate, and then over the rain spout? I remembered the adorable way he climbed the thick stones we use as a walking path in the garden. Yup.

I went inside to alert the others. Sam, Grace, and Keith joined me in searching the entire yard. "Think like a turtle," we started saying to each other. Crawling around the hostas, I realized Keith's done a lot of landscaping in the last ten years. There are too many places for a turtle to hide.

"This isn't funny anymore, Churchy," Keith said at one point. "You're starting to worry Linda."

He checked under the shed with a flashlight, but found no sign of him there. Keith said Churchy had disappeared before, back when they lived in St. Paul. He came wandering up the sidewalk a couple days later, as soon as he got hungry. That was more than ten years ago. Churchy is older, and he's a western box turtle, not made for this climate, come winter. Plus he only has three legs. And around here, there's always a mower going. I couldn't even think about it. I just kept searching.

Eventually, I let the kids go inside. I posted a panicked status on Facebook, poured a glass of chardonnay, and went back outside. Keith was carrying a two-by-four out to the gate that separates our yard from the neighbor's. The two families installed it when the kids were little, so they wouldn't have to climb the fence to play together. There was a little gap under the gate that Churchy could get through. We'd checked around the entrance to the neighbor's yard and he wasn't there. Keith was going to put the board in front of the gate to prevent him from crawling through.

"Let's look in their yard one more time," I said. "Doesn't look like they're home and they wouldn't mind."

Earlier, Keith had checked under their rhubarb plant a few feet from the gate. I started walking the fence line, checking the grass. Within seconds, Keith yelled, "I found him!" And there he was, tucked into his shell under another rhubarb plant, just inches from some strawberries.

"He probably smelled the strawberries and headed this way," Keith said. "He has a keen sense of smell."

"How far would you say he traveled?"

I picked up Churchy, but he wouldn't come out of his shell. He looked relieved but worried. "What the hell were you thinking, Churchy?" I said. "You had Keith worried sick."
Be the first to comment