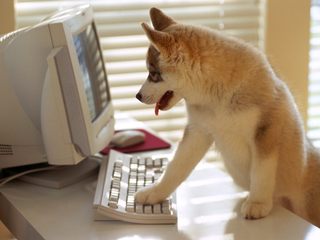 It’s happened to me twice on Facebook, so I’m guessing it’s happened to everyone at least once: the friend request from a dog. In reality, it’s from the dog’s owner or “human,” as the dog refers to him or her. But wait. We all know it’s the actual friend, the dog owner, who pretends the dog calls its owner “my human.” I know, I sound harsh. A dog is not an it, and cannot be owned. As when you accept a friend request from a non-human, I ask you to accept my premise, at least for the duration of this blog entry.

The first time it happened, my friend Randy sent a friend request from his dog Gus, for whom Randy had created a Facebook page. The request nagged at me. Gus’ antics were very cute. But Randy had already suggested a couple times that Churchy, my turtle, ought to have his own Facebook page—a suggestion at which I scoffed. I mean, I post about Churchy often enough on my Facebook page, and he is frequently the subject of my blogs (check out his many tags, and I’m not talking dog tags). Besides, he hibernates for half the year and doesn’t have a lot to say from November through April. Check the archives if you don’t believe me. I’ve resorted to writing about turtle dreams.

Also, as much as I love my turtle, I don’t like dogs that much. There. I said it. I’ve had dogs (and cats). I’ve fed them and cared for them. My dog Petey—God rest his soul—was my great protector. And D.J. had his own special charm. (Yes, Randy, his name was D.J., not B.J. Just because B.J. was his name at the shelter doesn’t mean he had to be cursed with it forever.) I would never wish harm upon a dog. But I am done living with them, I’m pretty sure. They sniff, drool, and sometimes poop indiscriminately. I could name at least one who did that (initials are D.J.).

I accepted Gus’ friend request. Why not? He has some funny things to say, and I’m not the one who has to baggie his crap. But then within days, I got another request from another friend’s dog. Hilory (the dog’s human) suggested I friend Cody. How could I be friends with Gus and not Cody? Wouldn’t they smell it on me?

And what the hell, those doggy Facebook pages can be charming, especially since I have very amusing friends who love their pets and know them so well; it doesn’t feel like they’re anthropomorphizing as much as channeling what their dog would actually say, if only the dog had the gift of speech and years of art or journalism school. I can’t wait for Churchy to wake up. He and I will have a good laugh over this phenomenon of modern life.