Putting it out there 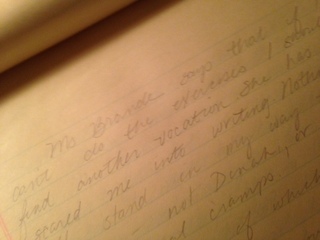 I came across a yellow legal pad with my writing from some 30 years prior. Several pages in I wrote this, in a whisper of fading pencil: “Ms. Brande says that if I can’t do the exercises I should find another vocation. She has me scared into writing.”

At first I was confused, but I soon realized that Dorothea Brande was the author of Becoming a Writer, first published in 1934. As an aspiring writer almost 50 years later, I bought the book and diligently performed the exercises designed to “tap the unconscious.” The book was still on my shelves, and I found the words that had scared me into writing:

“Right here I should like to sound the solemnest word of warning that you will find in this book: If you fail repeatedly at this exercise, give up writing. Your resistance is actually greater than your desire to write, and you may as well find some other outlet for your energy early as late.” [emphasis in original]

The exercise is as follows (again, italics are hers):

The best way to do this is to rise half an hour, or a full hour, earlier than you customarily rise. Just as soon as you can—without talking, without reading the morning’s paper, without picking up the book you laid aside the night before—begin to write. Write anything that comes into your head: last night’s dream, if you are able to remember it; the activities of the day before; a conversation, real or imaginary; an examination of conscience.”

The first several pages in my yellow notepad were written in ink—an exposé on a restaurant manager’s cruel indifference to my waitressing struggles, a brief recounting of a dream I barely remembered, and my boyfriend’s arrest for a minor offense screwing up our date night. But a few days into the exercise, I chose to write in pencil. This had to be intentional although not entirely conscious—I was, after all, trying to follow Ms. Brande’s exercises in tapping the unconscious. But my unconscious wanted to speak, or at least whisper, about who I had become and how I felt as a victim of an assault that happened the year before. My body had healed. The perpetrator was caught and imprisoned. But I still struggled with the new knowledge that this could happen to anyone, any time, any place. It could happen to me again. I internalized these feelings and put up a brave front. I didn’t want anyone to think he had broken me. Writing in pencil was as bold as I could go at the time.

As time passed I would become braver about identifying myself, in ink, as a survivor, as a way of proclaiming that I would not own the stigma. I wrote magazine articles and gave TV interviews. I was invited to share my experiences at training seminars for police officers. I spoke at fundraisers for victims’ rights organizations.

In recent years, I’ve grown cautious again. Other bad things happened, as they do to most people. You don’t want to come across as a victim all the time, and yet you don’t want to just put up with it either. Your kids grow into little adults who are easily embarrassed. You start questioning whether you’ve learned anything worth sharing or passing along. Social media makes it easier and harder at the same time.

A couple weeks ago, I had this dream. Layers of skin were peeling off my hand. It was like that wax treatment that was popular a couple years back where you dip your hand in a crock pot of melted wax and then peel it off, exfoliating and exposing fresh new skin. In the dream, layer after layer came off throughout my day. I’d think I was done and then an edge of skin would pop up, demanding to be peeled back. In the dream I thought, “I should feel grossed out.” But I wasn’t. I was excited to peel back the layers to expose my new self; to start, again, to be comfortable in my new, young skin.

So in 2015, my resolution is to reclaim my voice, even if it’s just writing in a notebook that no one else will read. When I write something that I think might be useful or meaningful to others, I’ll publish it in my blog. I will let my life speak. I’ll listen more carefully to others. I’ll try to find a balance between not embarrassing my loved ones and not silencing myself. That’s why I’m publishing this here, in case it might be helpful to others. It’s especially for young or aspiring writers who want to know how to start. Get yourself a copy of Becoming a Writer and do the exercises. Take everyone’s feedback with a grain of salt—think about it, abide by it if it makes sense, but don’t let it silence you. Let your life speak. Put it out there. Use a pen.