And all are welcome. 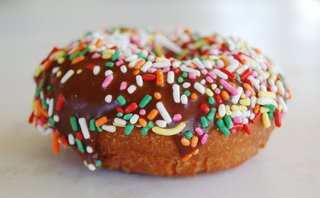 We were not what they call regular churchgoers, my family of origin. I was raised Presbyterian, sort of. For us that meant we religiously attended services for six weeks when I was in the fourth grade in order that I might receive a free Bible. After that, my dad refused to get up early on weekends. I can’t blame him, and I don't believe God cared either. Dad worked hard, and he wouldn’t be long for this earth. Plenty of time in heaven to make up for those missed Sundays. What I remember most are the donuts we picked up on the way home, delicious old-fashioned ones with dark chocolate icing. Sometimes, I'd pick one with sprinkles.

My best friends were Catholic, and since sleepovers were common, I spent many Sunday mornings attending mass with my friends’ families, where I did not even think about getting in line to take communion. I grew accustomed to being left behind in the pew to observe. At least once, I wondered what others thought of me as they walked past. They must know I’m not Catholic, I thought as I sat in the empty pew while my friend and her five siblings and their father—their parents were divorced—left me to take their wafer and perform whatever secret handshake was required at the front of the line.

I felt like this particular friend and her siblings were sensitive to my plight. Merciful, now that I think about it. Upon her return, my friend’s older sister made eye contact as if to say, I feel your pain, the awkwardness. Shake it off. This family lived the idea of judge not lest ye be judged.

I grew up and got married. My first husband’s grandfather was a Lutheran minister. At a church in a small town in North Dakota, we attended the 60th anniversary celebration of Cyrus Fossel’s ordination. As everyone prepared to stand up and go to the front of the church for communion, my husband whispered, “You can’t go.” I understood; this was a conservative synod that only allowed church members to take holy communion. My husband, a closeted atheist, joined the line. I refused to sit there in the pew and be judged. I took our infant into another room for the duration, feigning some motherly obligation, something short of breastfeeding, which was definitely out of the question.

Despite all of this or maybe because of it, after losing a child, divorcing my dysfunctional husband, and in the course of receiving the gift of second chances, I became a Christian. I bought into the whole Jesus thing. In fact, Jesus and I talk. Okay, it was in a dream, but it was significant to me. Point is I now like to take communion. This is the body of Christ, given to me in love. We give because we receive.

After my divorce, I moved back to my hometown and started attending a church here. One Sunday I was asked to serve communion, distributing the circular white wafers and the plastic cups of Kool-Aid to alternating rows. I wasn’t very confident about it, what with my gimpy hand holding the fully loaded brass tray. But to make matters worse, this old lady at the end of one row seemed blind to my existence. I knew her. We were on friendly terms. But as I whispered her name, nudging her shoulder ever so slightly, she ignored me. Finally I passed it to the person sitting next to her.

Later someone told me she refused to take communion from me because I’m female. There’s some rule about it in the Bible. I suppose the pastor had to catch up with her later, perhaps even visit her at her house to make sure she properly received God's mercy.

My world is different now. For the past six years, I’ve attended a church called House of Mercy. In this time, never once have I felt the isolation of being left behind in the pew. “This is the Lord’s table, and all are welcome.” That’s what Rev. Russell and Rev. Debbie say each Sunday around 5:45 in the afternoon. And each time they say it, I feel like turning around and yelling, “Did ya hear that, folks? All of us. You don’t have to be any particular kind of Christian, or even a declared Christian, or even, really, a Christian, to come up and commune with God for a few minutes.” It makes so much more sense this way. Why would anyone, clergy or church lady, want to limit another person’s opportunity to commune with God?

One time when I went up to take my portion from the loaf, my gimpy hand managed to pinch only a small piece, not even enough to dip in the blood.

How wonderful. thanks for sharing what began as a painful experience -- to the truth of Christ.