Rebel turtle (without a few claws) 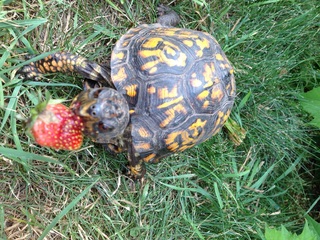 My teenage daughter ratted out the turtle. Turns out he's a rebel. A couple days ago, Churchy woke up from his winter's nap. This typically happens a few times a winter, and when he wakes up, he wants out of the terrarium. He thinks it’s spring, and time to get back into the garden and wait for tomatoes to ripen. He doesn’t mind waiting. (Although one June day a couple years ago, he managed to escape all the way to the neighbor’s strawberry patch. Thank goodness we found him before the neighbor’s dog did.)

But it’s too cold for the garden, so my husband gave Churchy the run of what we call “the lower level” of our split-entry. To keep Churchy from wandering too far, Keith placed a sturdy cardboard tube—think wrapping-paper tube on steroids—across the hall, just before the base of the stairs.

Keith mentioned that Churchy was up, so I went downstairs to say hi. Churchy was standoffish, which I didn’t take personally. With my eldest finishing up his first semester of college, I’m getting better every day at accepting that those who were once in my charge must at times stake their claim to autonomy. I do not own Churchy. He is not my pet. He is a 3-legged turtle who is far more capable than any of us give him credit for. I can only hope to be the wind beneath his wings.

At any rate, I greeted him warmly, even got down on the rug to make eye contact, albeit at a distance, and then went upstairs and reported on Facebook that Churchy was awake. I believe there were two, maybe three likes. Sometime later, Grace emerged from her room and saw that Churchy was beyond the barrier, ever so casually hanging out at the base of the stairs. She says he didn’t seem to notice her, but as soon as Keith’s steps were audible on the top flight of stairs, Churchy booked back toward the tube, climbed over it, and made his way back into his restricted zone.

We place the barrier there so Churchy doesn’t get lost, and also to remind the other humans in the household that there is a turtle wandering about, so watch where you’re walking. As a member of the sandwich generation, caring for increasingly independent teenagers while also trying to be useful to a parent who wants to stay independent, this is the crux of my existence: We’re all balancing, handicapped in some way, on an oversized wrapping-paper tube, savoring our freedom even as we run back inside the boundaries established for us by others. We seek freedom from the figure who has made him- or herself the authority, the one who is trying to make sure we don’t get lost or stepped on. And if you happen to be that person who has established herself as the authority figure, you can’t take it personally. But you might want to consider purchasing an even bigger roll of wrapping paper, if that’s even possible.

hi Linda. I just looked this up to show Churchy to my Mom. we both enjoyed this article. We came to San Diego to attend the memorial service for her Sister. I had a photo on FaceBook showing Mom by Anne's photos at the National Cemetery. It reminded me of Arlington.