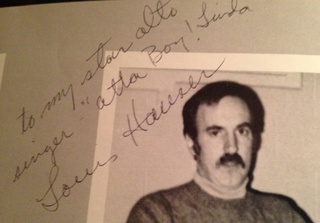 At Sunrise Junior High, we were on modular scheduling. Of course we were. It was the 1970s; everything was mod. Instead of hours, our school day was divided into 23-minute units called “mods.” A class might be two mods, a lab might be three. Lunch was one. During a free mod or two between classes, you might go to study hall. But more likely, you went to sing-along.

Sunrise was a low, flat building, and the choir room was in the southeast corner, past the gym and the locker rooms, the girls’ and boys’ showers: a safe haven. The choir teacher, Louie Hauser, presided over sing-along with his colleague Mr. Adams. It was difficult even then to refer to the former as “Mr. Hauser.” He was “Louie Hauser,” a dark-haired, mustachioed man who conducted us with great energy and enthusiasm, nodding at each of us as we picked up a binder of song lyrics before taking a seat on metal folding chairs in the choir bleachers.

There might be 30 or 40 of us in attendance during any particular mod. We’d grab a songbook and sit down, Louie Hauser and Larry Adams (also mustachioed, but with a mighty fortress of a forehead) at the front of the room, taking turns at the piano. For the next 23 or 46 minutes, we’d call out songs and sing them. Choir heads. Band heads. Jocks. Burn outs (already, there were burn outs, although at that point they were barely singed). Girl Scouts. Hippie wannabes. Cliques were erased as a kid from one faction called out a song that the rest of us would also enjoy singing. Between tunes, unlikely friendships, or at least acquaintances, were formed. “You look like a girl I know named Mindy,” someone I barely knew once said to me between songs, causing me to imagine myself as a Mindy for a second. It wasn’t unpleasant. I was just glad to be noticed, honestly.

I think that’s where I developed my capacity for remembering lyrics: “House of the Rising Sun,” “Maxwell’s Silver Hammer,” “Blowin’ in the Wind.” I’ve got all of Simon and Garfunkel locked in. Oh my God, "American Tune"?

We might as well have been in history class, or music history. But now that I look back almost 40 years, I realize it was so much more than learning the words to great songs. Although I’m now “Facebook friends” with many of the kids I went to school with, when we were in junior high, socially we were separated by enormous divides of cliques and the adolescent algorithm of social status. We were already in our little boxes (all made of ticky-tacky and they all looked just the same). What Louie Hauser and Mr. Adams accomplished was amazing. In 23-minute units of time, they brought us all together. And not once did we sing “Kumbayah.” Ok, maybe once, but this was the 1970s. It was a different time.

Loved this piece. You captured the essence of that time and place - I can picture and feel the freedom of those lucky students:)
(I am a friend of Cynthia Ekren')

Thanks, Karen. Any friend of Cindie's is a friend of mine. (Really, I'm systematically stealing them from her.)

Love this article. I shared it with my husband and confessed to why I could belt out the words to Arlo Guthrie's "City of New Orleans". That song (and many others) are permanently etched into into my streaming memory thanks to Mr. Hauser and Mr. Adams. His legacy lives on in all of us!

Thanks for the memories! I have those Sing Along books still, and will occasionally sit down at the piano and bang out a few of those tunes. I remember feeling honored to be asked to play guitar alongside the Louie at the piano. There was something magical about Sing Along at Sunrise, but I didn't really appreciate it until years later.

Nailed it. I caught up w/ both Louie and Mr. Adams at Central.

Mr. Hauser had the band (and later Mr.Woodbury) and Mr. Adams had the choir. I think my older brother Dave left quite an impression with Mr. Hauser, for when ever I screwed up, he said my brothers name.

Oh how I remember! Nicely written! I was a year behind you all the way through high school Linda. You hung around with the funniest people. I used to follow you guys around just to hear you all talk. I think you worked at Chesters when I did? Anyways, I've been doing Face Book for a while now and when I saw this site I immediately thought of and called Mr. Hauser. That was not this Easter but the one B4. He told me about how him and his wife run every morning and sometimes ride bikes around the lake (WBL) and were going to spend Easter with his son that lives in Prospect park area in Mpls right by the witches tower (the one mentioned in War for the oaks) They were going to ride their bikes along the Mississippi for fun. He was one of my favorite people in the whole world and I told him so and why etc. I am glad I had the chance. I am pretty broken up about his passing... Does anyone know how his wife is doing?

I'm so glad you reconnected with him and told him how you felt, Laurel. I bet that meant a lot to him. Yes, I worked at Chester's, first as a hostess and then as a waitress. Some funny memories from that era. Great to hear from you. Thanks for reading and for the kind words.