Thinking around the box 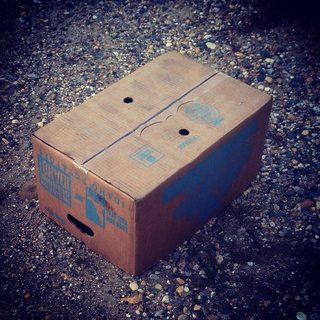 If you’re a writer who needs to make a living, eventually you might take a job in marketing, as a copywriter. (Don’t get me started on that title. What would one write, if not copy? It’s like calling someone an “art creator” instead of an artist. But I digress.) As a copywriter, you will inevitably be asked to “think outside the box.” The client will make this request as if it were a gift. “Feel free to think outside the box on this campaign,” he or she will say, smiling, as if tossing you a creative bone. Inevitably, when you present a concept you came up with while thinking outside the box, it will be rejected. Sure, the client will be amused, for a minute or two, perhaps even as long as it takes him/her to send a follow-up email before sharing it with other “key stakeholders.” But most likely, in the end, the committee will choose what is familiar.

Adults may talk about thinking outside the box, but it’s hard for us to dwell there. On the other hand, little kids don’t need to be told to think inside or outside anything. For really young ones, the box can be as interesting as the thing inside it. They’ll crawl in and around the box, place it on top of their head, or close the flaps above them and burst out as a human jack-in-the box, leaving parents to wonder why they spent money on the neglected toy that the box was meant to hold.

When Sam first suggested, at age 5, that instead of growing a vegetable garden, he wanted to grow a cookie garden, I have to admit my creative neurons lit up. What a great idea for a children’s book! I couldn’t have come up with the idea on my own, at least not as an adult. Now, at age 20, Sam admits he barely remembers thinking of the concept himself.

We lose that sense of joy and playfulness as we get older. We tend to forget that a box is not always a box. Likewise, a garden can be many things to many people. It can provide sustenance, beauty, and a place for children and parents to connect.

My friend and creative partner Dawn Rossbach illustrated The Cookie Garden. We’ve worked on it for more than a decade, on and off. Previously, we resisted the idea of self-publishing it, believing that if our book was worthy, the traditional-publishing powers that be—the arbiters of creative credibility and viability—would make it so. But as everyone knows, the publishing landscape has changed in the last few years. We started considering the idea that maybe, possibly, we might entertain the notion of self-publishing. We talked to publishers and authors. We looked into crowd funding. Soon we were acting almost like grownups, or at least entrepreneurs. We consulted a lawyer and made a collaboration agreement. We opened a joint bank account. We got the hell out of our own way.

Last month, Dawn came home from work and found an empty box, upside-down in her driveway. She took it as a sign. We had just chosen a publisher. We were building our Kickstarter project. She was finishing up the last of the illustrations and I was making final edits. And there was this box, dropped out of the clear-blue sky into her driveway, as if to say, I dare you to crawl back in.

Nice! I look forward to reading it!

So fun to read this again.