The girl on the lawn 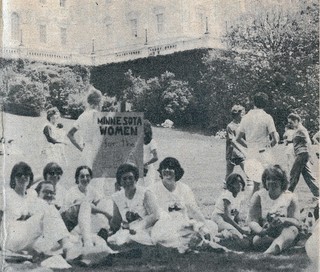 That's me, sitting on the lawn, second from the right, summer of '78.
Forgive my departure from whimsy and turtle adventures, but like a lot of us, I’m alarmed.

For the last year and a half, the orange man has been a constant media presence. When he first started running for president, I couldn’t imagine how much of the air he would suck out of the world, with his bottomless greed, hateful rhetoric, and galling need for attention.

I never watched The Apprentice, not a single moment, scene, or episode. I never warmed to the reality-TV genre. I didn’t imagine he would be elected president. I looked forward to him fading away, when his audience, with its short attention span, moved on, or at least his rhetoric was limited to conservative talk shows I could easily avoid.

I spent the last couple of weeks in a state of shock, grief, anger. I haven’t moved through the stages; it’s more like I’m trying to balance them all at once. As a victim of sexual assault, I am appalled that a sexual predator would be elected to lead this country.

As he fills his cabinet with racist, anti-gay, controlling, white old men, I am determined to do everything I can to take my country back, for the sake of all of us — gay, straight, transgender, Native American, African American, Hispanic, Muslim, Jew, Buddhist, Christian.

Regarding the latter, I reclaim my faith from the so-called Christians who voted for a man who is so unlike Jesus it is tempting to call him the antichrist.

Yet as I crawl out of the numbing shock and grief, and in the name of love attempt to channel my anger into positive action, I need to get this person out of my head. I am a news junkie. I’ve gotten into the habit of waking up each morning and flipping through the latest from the New York Times, NPR, the local papers, articles that kindred spirits post on Facebook.

To some extent, I have myself to blame for allowing a reality-show real-estate developer to occupy my thoughts. Yet there he is: as I make my coffee, as I eat my lunch, as I unwind at the end of the day and watch news or a little comedy. He even followed me to yoga on Saturday morning.

We started in shavasana, corpse pose, in which you lie completely still, relaxed, clearing the mind. Nothing like attempting to clear the mind to draw attention to what’s moved in. I needed to fire him from my brain.

An image of myself popped into my head. It is the summer of 1978. I’m 16 years old, sitting on the lawn of the Capitol surrounded by women from the Minnesota delegation who came to march on Washington for the E.R.A. I’m listening to Bella Abzug give a fiery speech in which she says, in her Brooklyn accent, “and we’re damn mad!”

I can see myself because someone snapped a photograph that was later published in a local feminist newspaper. It is a grainy, black and white image. But in my mind’s eye, I see it in full color; I’m at the peak of my potential and promise.

Nothing bad had happened to me yet. Two summers later, that would change, when a stranger hit me with his car and then drove me to a church parking lot where he beat me up and assaulted me. The ER doctor told my parents I probably wouldn’t survive.

Through hard work and the support of my parents and family, I recovered physically and emotionally — to whatever degree a person can recover from the knowledge that you can be the victim of so much hate and violence simply because you were walking down the street.

My parents supported me through the legal process, when he attacked another woman as he awaited trial in my case, and again eight years later when I testified in support of him being civilly committed rather than released to halfway house. I wrote about these experiences and was an outspoken advocate for victims’ rights. I channeled my fear and anger into action and advocacy.

From now on, instead of tying myself up in knots, thinking about the Trumps in their golden penthouse, fretting about all the horrible ways in which this could end, I will train my eye on the girl sitting on the Capitol lawn.

If I could have seen into the future, knowing all the things that can go wrong over the course of one’s personal and political life, I might have fallen into despair. Perhaps that naivete is a good thing. It made me hopeful and strong, prepared me for the fight ahead.

All I had then was the promise of marching with my sisters and brothers, singing “we shall overcome, someday.” We have overcome so much. We’re damn mad, and our work is not done. Get your shoes on; we’ve got a lot of miles ahead.

Hooray! We all have to stop thinking this can't have really happened and start taking action. You are inspiring me!