The worst place in Minnesota (to build pipelines) 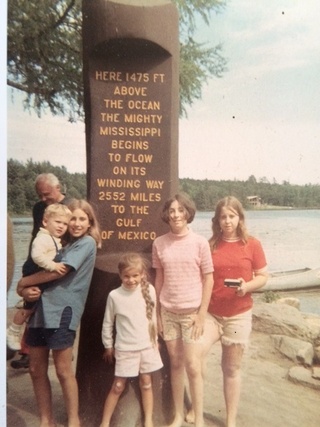 The author, center, with brother and sister on the left, and cousins on the right, circa 1970, Headwaters of the Mississippi.
During summers at my grandparents’ resort in north-central Minnesota, one of my favorite things to do was visit Itasca, the Headwaters of the Mississippi, for the simple thrill of walking across the narrow stream, bare feet on slippery rocks, at the place where the river begins. I’m still amazed this is the same river as the one back home in St. Paul, flowing north from its source and meandering a bit, like a summer tourist in no particular hurry, gaining energy and strength for whatever lies ahead.

The resort is still in the family. We still take trips to Itasca, now with the next generation of grandchildren. And I am still awed by this beautiful place—not only the Headwaters but also the towering old-growth pines, the quiet hours on the lake, listening to loon song from the front porch of the cabin. I lived in the area for a decade, on the Shell River. It’s where my children were born, where they learned to love being outside to climb trees, play in the dirt, and jump in the lake.

That’s why it seems like the last place on earth we would consider allowing a foreign corporation to build oil pipelines strictly for their own profit. Enbridge’s proposed Sandpiper pipeline would carry 375,000 barrels of Bakken crude oil a day, and Line 3 would carry 770,000 barrels of Alberta tar sands oil: a total of 48 million gallons each day running under eight state forests, three wildlife management areas, 13 trout streams, and the North Country Trail. According to the Minnesota Pollution Control Agency, the pipeline route crosses an area with the highest susceptibility for groundwater contamination.

Why would we risk spilling oil across this priceless landscape? Is it worth the 1,500 temporary jobs Enbridge may provide to workers in North Dakota and Minnesota? Or maybe it’s the property taxes Enbridge estimates it will pay: about $4 million annually to Hubbard County after the first year of operation. At $45 per barrel, the company will pass $51 million worth of oil through Hubbard County each and every day. Two hours into their first day of operation, they’ll have moved enough oil to cover their property tax obligation for the year.

Meanwhile, the county’s tourist-related businesses, which according to the Minnesota Department of Revenue grossed more than $30 million in sales in 2013, will be significantly harmed if not ruined in the event of a spill. And how do you put a price on the threat to treaty-bound rights to gather wild rice, an integral part of Native American life that has endured for thousands of years?

When the pipeline corridor is covered with snow and ice during the long winter, cleaning up a spill would likely have to be postponed until spring. That’s what happened in Yellowstone in January of this year. Even if we were lucky enough to have the oil spill during the warm months, the results would be disastrous and cause long-lasting, irreparable damage to the land, quality of life, and many livelihoods. Ruptures are common, even in recently built pipelines. Last year, a one-year-old Nexen Energy pipeline ruptured in Alberta, Canada, spilling 1.3 million gallons of tar sands oil, water, and chemicals, into fragile wetlands. And in 2010, an Enbridge pipeline ruptured in Michigan, polluting 35 miles of river, the largest inland oil spill in U.S. history.

Given the fact that the U.S. has 400 million gallons of oil in storage, and this is a Canadian company that will be profiting by selling oil to foreign concerns, why would we allow them to ruin our natural resources? The Friends of the Headwaters has requested a full Environmental Impact Statement (EIS) for both pipelines, which is currently being litigated for Sandpiper. Whether or not the court decides in favor of a full EIS, the state of Minnesota can order risk and consequence assessments.

In June, the Public Utilities Commission granted a Certification of Need for the Sandpiper pipeline. The PUC and the Minnesota Department of Commerce have scheduled a series of public meetings on Enbridge’s proposed Line 3 Replacement. If you can’t attend a meeting, public comments are being accepted through September 30, 2015. Please consider adding your voice to those who want to protect Minnesota’s lakes, rivers, and forests from greedy corporate polluters. Write a letter to your legislators and to Governor Mark Dayton. To learn more about what you can do, visit www.friendsoftheheadwaters.org.

As to the billions of gallons of oils transported though pipelines the percentage that spills is like a pebble in the Grand Canyon and spills are a naturally recoverable event. Saying that tourist business will be significantly harmed is not provable. I do not like pipelines but what realistic alternatives are there?

This is a WONDERFUL letter, Linda. Thank you so much for writing this. I personally think we’re going to stop this from coming through our precious Headwaters.