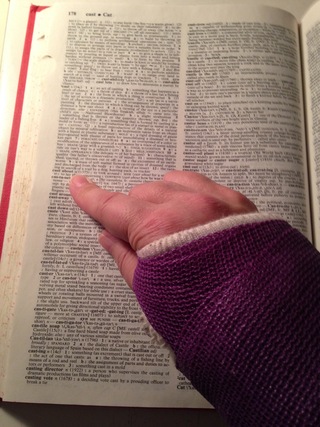 I’ve been thinking about this a lot lately, perhaps too much. I blame the cast on my arm for this most recent obsession. I’m wearing it for three weeks as I recover from surgery, and I’m about halfway through. I chose purple, and I like to think of it as an accessory, albeit one I can’t swap out for something that matches my outfits better. Anyway, so far, so good. It’s relatively comfortable and I appreciate that it protects my muscles and tendons as they get used to their new arrangement.

But it has got me thinking. “Cast” can be a noun or verb. As a verb it can mean “to throw out,” as in casting a fishing line. But it can also mean “to set,” as in casting in stone. This epiphany led to an internal debate over whether “cast” then qualifies as a contranym, a word with two opposite meanings. For example, “sanction” is a contranym because it can mean a penalty for disobeying a law or it can mean to give permission. Another one is the word “overlook,” which can mean to supervise or to neglect. But so far I haven’t been able to locate “cast” on any lists of words that qualify as contranyms, lists compiled by word geeks across the internet who presumably would know one when they heard it.

As a noun, a cast can mean actors in a play or a movie. Or a cast can be like the one on my arm, used to hold a limb in place as it heals. Maybe the cast of a play holds its audience in place so they can heal. A good cast can captivate an audience, holding them captive not by force or fear but by being, well, captivating.

Cast also plays a strong supporting role in other words: broadcast, castaway, castoffs. You can see where we got the word “broadcast,” as in casting one’s voice broadly across the airwaves. “Castaway” can mean to be cast adrift or washed up on shore as a survivor of a shipwreck, like Gilligan. A secondary meaning, according to Merriam-Webster, is being thrown away, rejected, left friendless with no resources.

So when a castaway is a survivor of a shipwreck, we root for him (or all seven of them) to be rescued. But when a castaway is someone who has been rejected, left friendless and without resources, we figure they deserve it. Another example of “cast” as a contranym?

Although these days when it comes to that secondary definition of castaway, we’re more likely to refer to a rejected person or thing as a “castoff.” Castoffs are the clothes you donate to Goodwill, pass down to a younger sibling, or discard, items you no longer want or need. Things you don’t want back. Like when I get this cast off, it will be a castoff. But for now, it captivates me.